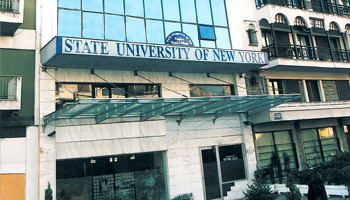 New York College, of which Thessaloniki is a branch campus, was founded in 1989 in Athens with the assistance of the State University of New York, Empire State College. Its purpose was to provide Greek students with the opportunity to receive an American university education leading to an accredited degree.

The branch campus in Thessaloniki was opened in 2001, with the aim of providing similar educational opportunities as those on offer in Athens to students in Northern Greece and the Balkans. it was first accredited by BAC in March 2002.

The campus is located 2.5 kilometres from the city centre and is a modern five-storey building in a pleasant area with nearby social and recreational facilities.

New York College (Thessaloniki) offers a smaller range of programmes than the Athens campus, concentrating on programmes from three providers: the University of Greenwich; the State University of New York, Empire State College; and the Institut Universitaire Kurt Bosch, Switzerland. Programmes are either at degree or postgraduate level.

New York College in Thessaloniki is licensed by the Greek Ministry of Education to operate as a Centre for Post-Secondary Education.